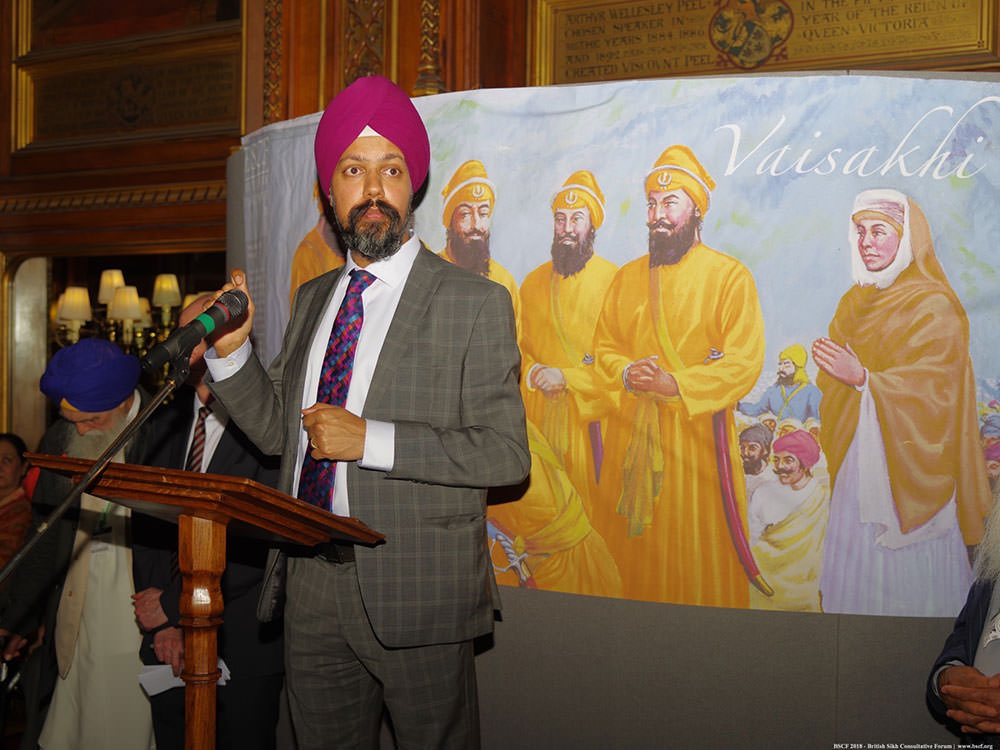 It was attended by about 150 people, comprising representatives from Gurdwaras, Sikh Organisations, inter-faith groups and individuals. In addition, many MPs visited/popped in and met with guests. It was a successful and enjoyable event which provided opportunities to people to meet up, network, enjoy delicious snacks and hear key speakers from BSCF, Sikh organisations and MPs.

The event opened with beautifully performed kirtan by young people from Guru Gobind Singh Gurudwara, Bradford.  Rt Hon Pat McFadden MP then welcomed all guests and explained that the event is attended by all political parties, representatives of which say a few words during the celebrations, as well as some representatives from Sikh organisations. Dr Sadhu Singh welcomed guests on behalf of BSCF.

The speeches from BSCF and Sikh organisations can be seen below.  Briefly Bhai Sahib Mohinder Singh, Chair of BSCF, highlighted the importance of Vaisakhi for Sikhs; Mr Jagtar Singh, Secretary General from Sikh Council included in his talk the impact of Brexit on Sikhs and the need to build a Sikh monument in central London; Mr Avtar Singh, Chairperson of newly formed Council of Gurdwara Committees, explained what this new organisation would be doing; and Dr Jasdev Singh Rai, General Secretary of BSCF spoke among other things about the need to ensure that Britain will continue to promote understanding of Sikhs in Europe even after Brexit and further suggested that the Government be sensitive to sentiments of minorities when formulating foreign policy. The stage manager Davinder Kaur Lally introduced all speakers professionally providing their brief background for guests.

A key highlight from the MPs speaking was from Rt Hon John McDonnell MP, who announced that the Labour Party is proposing National Vaisakhi month in April to raise awareness about Sikh principles of equality and democracy across the country, an intitiative promoted by Seema Malhotra MP who gave further details.

The Rt Hon Sajid Javid, Secretary of State, included in his talk the huge contribution made by Sikhs in the country and his support for a Sikh monument.

Alison Thewliss MP also highlighted the valuable contributions made by Sikhs in the country.

As in previous years, Punjab Restaurant very kindly provided delicious snacks to all guests. Guru Amardas Gurudwara and Central Gurudwara Shepherds Bush sponsored refreshments, Gurudwara Sri Guru Singh Sabha Southall provided sweets, folders were sponsored by Sikh Welfare Research Trust and bags by Sikh Links. Photographs were taken by Jagdev Singh Grewal and Jaswinder Singh Nagra. Video recording of the event was undertaken by Harpreet Singh Khalsa and Bhupinder Singh Khalsa of Lens Masters Photography Ltd. Photographs can be accessed here < View all Photographs >. An edited version of the recording of the event will be available soon on this website.

BSCF would like to thank all the guests, MPs, sponsors, volunteers, Rt Hon Pat McFadden’s office and the speaker’s office for making the event a success