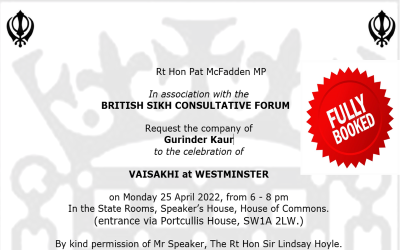 This year we can celebrate it in person as the Pandemic appears to be at an end. British Sikh Consultative Forum holds a Vaisakhi celebration function every year at Parliament. Last year we held it online, this year we will be holding it at Westminster.

The event is being organised by BSCF in conjunction with Rt Hon Pat McFadden MP.

This function is attended by Cabinet Ministers and Party leaders. Prime Ministers have also joined on five occasions along with leaders of the Opposition. Several MPs attend the function.