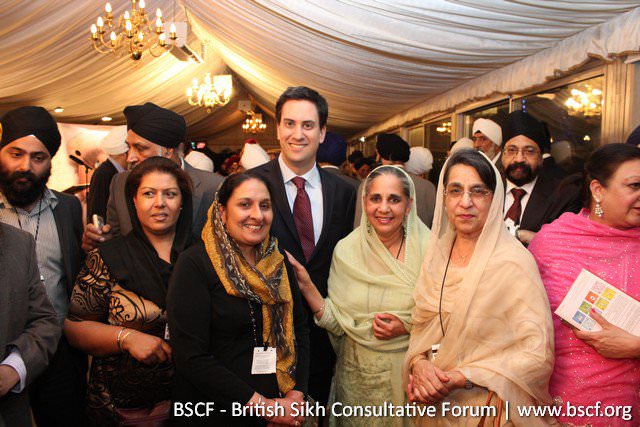 At the fifth Vaisakhi celebratory function held at parliament by the British Sikh Consultative Forum, Theresa Villiers, Minister for Transport with responsibility for aviation, said that the trials are going well and it appears there will be positive outcome. Many airports have joined the voluntary scheme. The Minister hopes that the trials will pave the way for improved practices across Europe.

The Minister also said that the Department was aware of pending concerns. She spent over 40 minutes and talked to several Sikh leaders at the function on this issue. The Minister said that discussions will continue with the Sikh community and that the Government is very keen to find a solution which is satisfactory. Theresa Villiers gave best wishes to the Sikhs on Vaisakhi and spoke warmly of Sikh contribution to British society.

Opening the function, Bhai Sahib Bhai Mohinder Singh ji, Chairman of BSCF,welcomed the guests and the Rt Hon Eric Pickles, Secretary of State at the Department of Communities and Local Government. Mr Pickles wished every one happy Vaisakhi. He spoke about the wider contribution of Sikh society to British life and said that that Britain shared the ethics and values of the Sikhs. Mr Pickles also said that he was aware of pending issues around security and feels that dialogue will resolve them. Mr Pickles met with members of the Sikh community gathered and talked with them about common aspects.

Dr Jasdev Singh Rai, General Secretary of BSCF, welcomed the Rt Hon Ed Miliband , the leader of the Labour party. Mr Miliband said that he wanted to come to the event and followed in the tradition of Gordon Brown who regularly attended the function. Mr Miliband said that the Sikh community had played a wide role in the Britain and we should all be proud of that. He spoke of the ethics of work and caring which were found in Sikh community.

Pat MacFadden MP, announced the names of several MPs who had joined the Vaisakhi function. The event was sponsored by Mr MacFadden and jointly hosted with Mr Paul Uppal MP. Mr MacFaden introduced Stephen Timms, the Labour chair of Faith issues. Mr Timms said that Faith communities have a strong and positive role to play in the governance of the country and he encouraged Sikhs also to come forth in the political system.

Mr Andrew Stunnell, minister at the Department of Communities and Local Government, also spoke. He talked about localism and the strong sense of Big Society principles within the Sikh community. M Stunnell heads the faith communities division at DCLG and said his department is always eager to assist with issues.

Lord Ahmed also spoke. He referred to Guru Nanak and said that Guru Nanak was revered by all communities, including Muslims and Hindus. His teachings are shared by all. He wished everyone Happy Vaisakhi.
Bhai Sahib Bhai Mohinder Sing spoke of the importance if the turban to Sikhs. He said that it was a gift from the Gurus which Sikhs will always keep. He said that many Sikh pactices had been accommodated in UK but some issues still remained , particularly around security and turban. He hoped these would be resolved satisfactorily.

Justice Sir Mota Singh talked about the importance of Vaisakhi and contribution Sikhs make to Britain. He talked about the strong ethics of the Sikh community which made them good citizens.

Dr Sadhu Singh, Vice Chairperson of the British Sikh Consultative Forum, thanked all who had come. He organised stage proceedings. He quoted a statement from Winston Churchill which states that while the British respected the Sikhs wearing their turbans when the British were in need of Sikh sacrifices, the British should also respect the Sikhs when that need goes away.

About 160 guests attended and another 25 members of Parliament and Lords also attended. Himmat Singh Sohi, president of Sri Guru Singh Sabha, congratulated BSCF and wished everyone a happy Vaisakhi. Siksh came from Bradford, Leeds, Derby and several other towns. Minister for Transport, Theresa Villiers statement was welcomed by most guests.