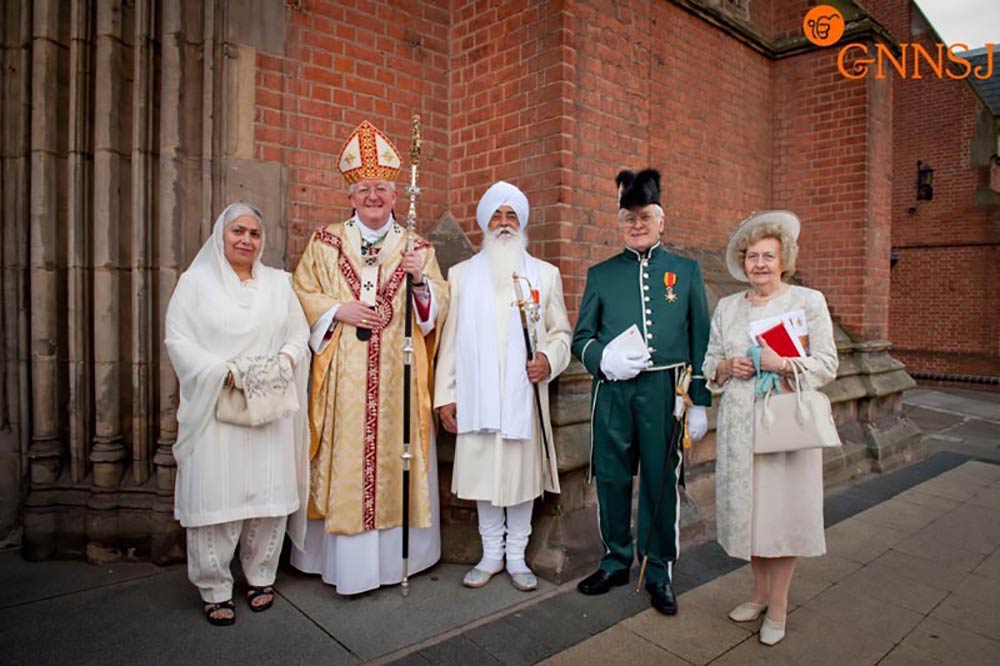 Bhai Sahib Mohinder Singh Ahluwalia was created a knight by the Holy Father Pope Benedict XVI in recognition of his dedicated work for Roman Catholic Sikh relations and for his enthusiastic commitment to working for peace among people of all faiths.

It is the first time in history that a Sikh was honoured with The Pontifical Order of Knighthood of St Gregory. An award granted in recognition of an individual’s pre-eminent service to their faith, community, or the work of the Holy See on a local, national and international level. The Papal Order of Saint Gregory was originally founded by Pope Gregory XVI in 1831 and reformed by Pope Saint Pius in 1905.

The ceremony was held on Sunday 22nd April at Saint Chad’s Cathedral in Birmingham and led by The Most Reverend Bernard Longley, Archbishop of Birmingham. The Order of St Gregory is one of five Pontifical orders of Knighthood in the Catholic Church and is usually bestowed on Catholics. On rare occasions the Order is also conferred on non-Catholics in recognition of meritorious service to the Church and exceptional example set in one’s own community or country. More than 100 Sikhs fromBirmingham,London, Leeds, and some who had come fromKenya,Canada andIndia were present in StChad’s Cathedral for this unique and ground-breaking event in inter-faith relations involving the Catholic Church and the Sikh faith.

The occasion brought together Roman Catholic and Sikh devotees in hymns of praise from both traditions; something unique in a Cathedral service. Onlookers witnessed a historic event unfold for both Catholics and Sikhs. On completion of the ceremony the Sikh community’s jubilation call “Bole so Nihal” echoed in the vast Cathedral depicting a real victory for interfaith collaboration.

Commenting on the momentous event, the Most Reverend Bernard Longley, Archbishop of Birmingham said:“Today I have been very grateful to the Holy See to bestow upon Bhai Sahib Bhai Mohinder Singh, one of the faith leaders in the City of Birmingham and spiritual leader to many Sikhs across the globe, with the honour of the Papal knighthood and I am grateful it is in recognition for the contribution he has made to Sikh – Catholic relations, not only here in Birmingham but in many other places.

“Today marks a historic occasion, a moment of thanks giving to God for drawing us together, and I am very greatful for it. I am very greatful to the Holy Father for this acknowledgment and recognition and I am also greatful to Bhai Sahib for the encouragement that he gives us all to work much closer together as people of faith for the common good and search for truth.”

The Archbishop continued: “I believe that it is the first time that a Papal Honour has been bestowed in this way on a spiritual leader from within the Sikh community. It represents the Holy Father’s recognition of Bhai Sahib’s deeply held desire for fruitful and lasting relations between Sikhs and Catholics and opportunities to witness together.

“We recall Bhai Sahib’s presence inAssisifor the international meetings of faith leaders at the invitation of Blessed Pope John Paul II and of Pope Benedict – and I am sure that he will long remember being present with Mandla Ji in St Peter’s Square at the funeral of Blessed John Paul II during April 2005”.