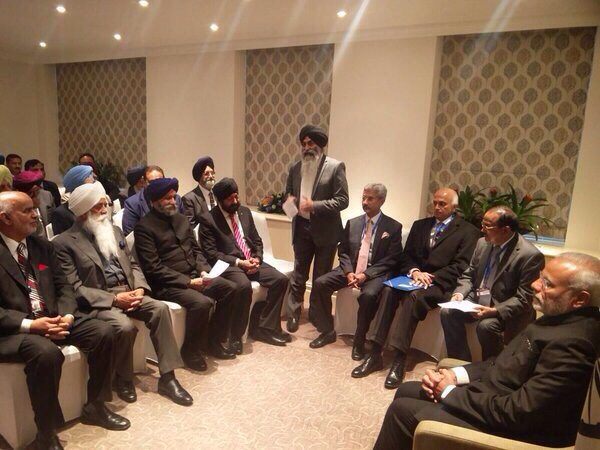 The Indian Supreme Court last week revised a judgment of Supreme Court 3 member bench where life sentences had to be served for life – that sentences of people serving life can be commuted if the Central Government in India gives its consent. This change in judgment following Prime Minister Narendra Modi’s statement to Sikhs in which he initiated opening talks with Sikhs worldwide has raised hopes of imminent release of long serving Sikh political prisoners, some of whom have been jailed for more than 25 years.

India has recognised Sikh-India tensions are a world-wide issue affecting Sikhs globally, paving a way forward for the first time for a resolution to relations that were severed in 1984 following the attack by Indian troops on the Sikhs’ most revered place – The Golden Temple (Sri Harmandir Sahib)*.

At a meeting in London – 12th November 2015 – Prime Minister Narendra Modi addressed a delegation of Sikh representatives acknowledging that the Sikh-India issue reached out to all the Sikhs globally since Sri Harmandir Sahib has the same spiritual relevance to a Sikh in Amritsar as to a Sikh in Delhi, London, Melbourne or Montreal.

In a further shift by the Government of India, Prime Minister Modi acknowledged the principle of Miri-Piri* of Sri Harmandir Sahib and Sri Akal Takht Sahib, the spiritual and temporal base of the Sikhs, emphasising the need to find ways to strengthen these institutions.

PM Modi also discussed that the Government will work on the ‘blacklist’ of Sikhs prohibited from travelling to India, and hasten the release of Sikh political prisoners who have served their statutory sentences.

The PM gave a message to all Sikhs, “India is your country, the land is yours, I am your Prime Minister. You do not have to request for anything. You can tell me as a matter of right and I give this right to you”.

Dr Jasdev Singh Rai feels that this is the first time an Indian PM has acknowledged the stake of Sikhs worldwide in the institutions of Sri Akal Takht Sahib and Sri HarmandIr Sahib and accepted their direct interest in the issues relating to the institutions and the attack of 1984 – “This is a turning point and we now need to move forward to resolving the issues. It has been frustrating for worldwide Sikhs since the Golden Temple is as important to us as the Vatican is to Roman Catholics”.

“No one should expect immediate and easy results. This is the start of a process. There will be hard negotiations ahead and we will need to take the worldwide Sikh community along on this”, says Dr Rai.

THE STORMING OF THE GOLDEN TEMPLE (Sri Harmandir Sahib) by the Indian Army in1984 was an Indian military operation – ‘Operation Blue Star’ – which occurred between 3rd June and 8th June 1984. It was ordered by Prime Minister Indira Gandhi in order to establish control over Sri Harmandir Sahib Complex in Amritsar, Punjab, and remove Jarnail Singh Bhindranwale and his followers from the temple buildings. No legal warrants were obtained for their arrest.

The operation was carried out by Indian Army troops with tanks, artillery, helicopters, armored vehicles and tear gas. Casualty figures put forward by independent human rights organisations state they include over 4,500 civilians.

In addition, it is believed that Govt agencies were responsible for seizing historical artifacts and manuscripts in the Sikh Reference Library before burning it down. The military action led to uproar amongst Sikhs worldwide and the increased tension following the action led to assaults on members of the Sikh community within India. Many Sikh soldiers in the Indian army mutinied, many Sikhs resigned from armed and civil administrative office and several returned their awards and honours they had received from the Indian government.

IMPORTANCE OF MIRI – PIRI – The term connotes the close relationship between the temporal and the spiritual for Sikhs. It governs the basic principle, which has influenced their religious and political thought, as well as their societal structure and behaviour. The concept is consistent with traditional Indian philosophy of ‘Dharma’ being the guide over political governance. There are also echoes in western world such as the spiritual and political sovereignty of the Anglican Monarch in the UK. There is the obvious example of the Vatican. This correlation between the spiritual and the mundane had in fact been conceptualised in the teachings of the founder of the Sikh faith, Guru Nanak (1469-1539).

ABOUT BSCF – Established in 2002, the British Sikh Consultative Forum provides a forum for Sikh organisations to come together for mutual consultation as well as offer a central point for interface with Government, national bodies, organisations and other communities.

All members are autonomous Gurdwaras, organisations and institutions in their own right. The body is authorised to make statements and representations on behalf of members in accordance with procedures set.

ABOUT SIKH COUNCIL UK – The Sikh Council UK is a representative body of Sikhs in the UK, recognised as one of the national advocates for British Sikhs in the United Kingdom and in the European Union. Affiliated member organisations include Gurdwaras, local & regional Gurdwara Councils, Jathebandis, campaign groups, youth and women’s organisations and educational establishments.