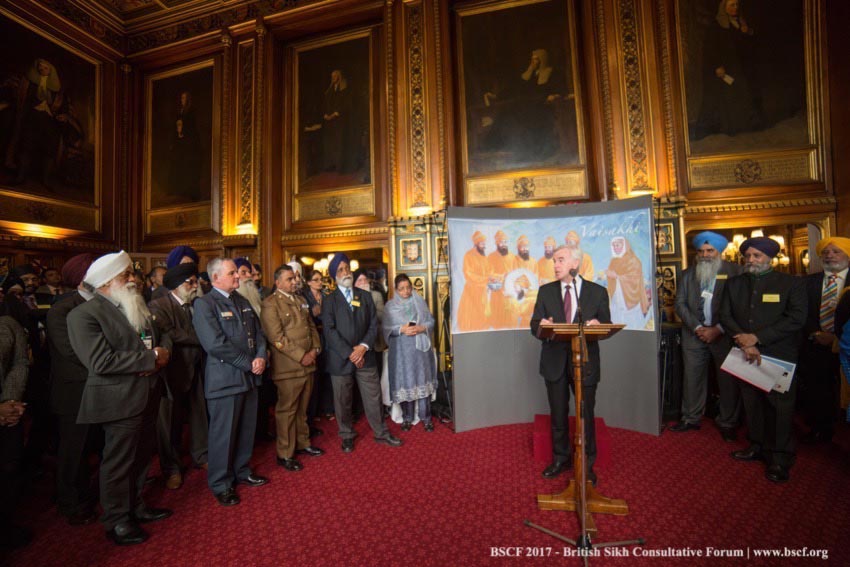 Dr Jasdev Singh Rai the General Secretary of British Sikh Consultative Forum, spoke for all expressing our deepest shock at the attack on Parliamentary premises on the 22nd March, which resulted in the death of innocent people and a police officer in the line of duty.  He applaud the work of security services and police in keeping our country safe and the MPs who show resilience in the face of such attacks.  He also acknowledged our Parliamentary representatives who have worked hard for us through the year. Stating “We have always been impressed by the understanding and support our MPs have given to issues that concern Sikhs and indeed wider community issues.”

While there are many opinions about the referendum outcome and the triggering of Article 50, for the Sikhs there are some particular issues that BSCF would like to bring to the attention of the Government and our Parliamentary representatives. The United Kingdom has always shown the best understanding of Sikhs as a community and Sikhi as a faith. Sikh practices, and Sikh values have been accommodated within British law, policies and general life.

In Europe, there have been difficulties because of the smaller number of Sikhs and the lack of historic links with Sikhs. But the United Kingdom, through its very able Government and civil servants have assisted in bringing a better understanding of Sikhs in Europe and softened some of the legal and policy decisions that would otherwise have affected us.

A recent notable example was the hand searching of turbans at airports. Working together with Sikhs, the UK Government showed exemplary leadership in persuading Europe to introduce practices in search methods that both kept the dignity of Sikhs and maintained the intention of the directive.  With Brexit, we will lose this powerful persuasive assistance that UK has been providing the Sikhs. We will urge the Government and our representatives that during the talks on Brexit and after Brexit, the Sikhs should also be kept in mind.

Our request will be to have some meetings between the relevant departments and the Brexit team with some leading Sikh organisations to reach an understanding and strategy on how Britain can continue to extend that support and assistance on our issues in Europe even after Brexit.

We are realistic to appreciate that this is a very minor issue in the list of bigger matters on the Brexit table, however we will request Government not to forget it completely either. On matters of Foreign Policy, We again urge the Government to take into consideration the sensitivities of UK minority communities before embarking on major actions.

Mrs Balvinder Kaur Saund, Chairperson of the Sikh Women’s Alliance spoke of gender equality within Sikhism highlighting its liberal values and freedoms.  She spoke of how our first Guru and founder of Sikh faith, Guru Nanak Dev Ji, six centuries ago took us out of purdah (veil), satti (widow burning) and cultural chains to elevate us higher than men.  Our third Guru, Guru Amar Das Ji trained 146 missionaries, out of which 56 were women.  He established 22 Dioceses (Manjis) and 4 were run by women.  Throughout history, Sikh women took active roles and it needs to be appreciated that Sikh women have been leading Sikh religious institutions since its origins, at least four centuries before the acceptance of women in religious institutions in many other faiths.

Ms Manchandan Kaur Sandhu of the Sikh Federation UK explained the creation of the Khalsa, highlighting that the identifiable Khalsa created by Guru Gobind Singh Ji is dedicated to the service of others and to pursue justice for all people of all faiths. Ms Sandhu also drew attention to the fact that whilst sikhs had the highest turnout of any group in the last General Election and Sikhs are 5 times more likely to be members of political parties, of the 650 MP’s there are no Sikh MPs. Comparisons were made with Canada highlighting how 17 of the 338 MPs, including 5 turban wearing Sikhs and 5 Ministers.

Jagtar Singh Gill the Secretary General Elect of Sikh Council UK spoke on the subject of Brexit and how we need to take into account Sikh specific challenges. These included continued support by UK and European politicians for Sikhs living, travelling, studying and working in all parts of Europe. Also to ensure the hard won and greatly appreciated rights that Sikhs in the UK have covering religious practice and observance including for the five K’s are not adversely effected and that there are no unintended consequences for Sikhs when UK law supersedes European law. Finally supporting Sikhs in Europe to ensuring Sikh rights including the wearing of Sikh articles of faith after the recent ECJ ruling

Bhai Sahib Mohinder Singh Ahluwalia the Chairman of Nishkam Group and Chairperson of BSCF provided an insight on Vaisakhi. He also thanked our Prime minister, The Rt Hon Theresa May, and Adama Dieng, UN Under-Secretary General, for their kind words said to the Sikh communities on this auspicious day of Vaisakhi.

Dr Sadhu Singh, Vice Chairperson, British Sikh Consultative Forum, stated how grateful we all are to the Speaker of the House, Mr John Bercow MP for hosting this event again. This year we had representatives from several organisations, Gurdwaras, professions and walks of life. We were delighted to have so many Members of Parliament and House of Lords also joining us in Vaisakhi.

It was acknowledged that this year we celebrate Vaisakhi here in the shadow of the very recent tragic incident which had all the hallmarks of a terror attack. We must remember the innocent people who lost their lives or were injured as well as the brave PC Keith Palmer who was killed trying to prevent further carnage. We applaud our MPs who showed strength of character. We pray that such an event will never happen again.